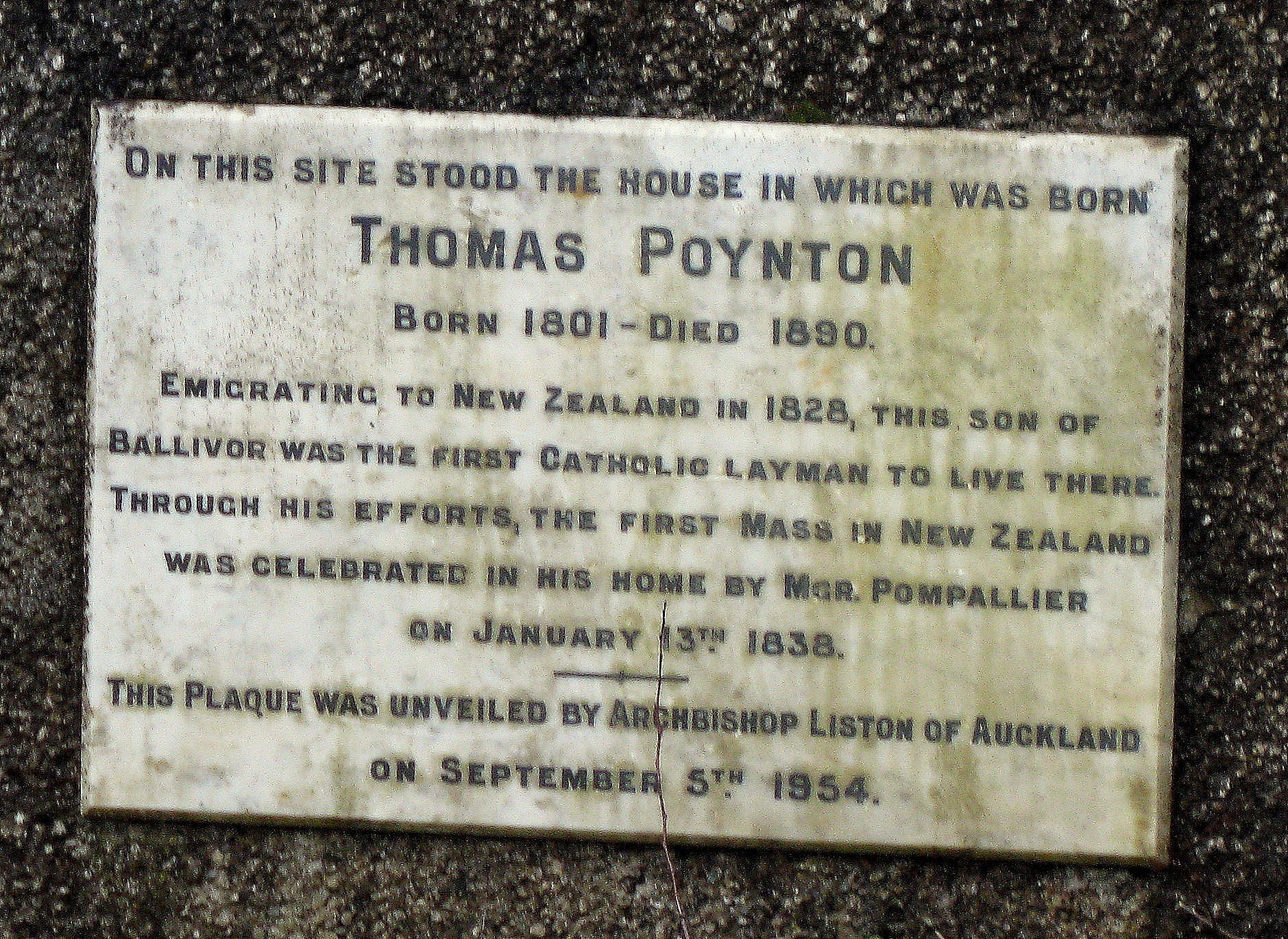 We pass it every Sunday on our way to the flying site but, except when giving someone directions, probably never give it a second thought.  I am of course referring to Poynton’s Plaque which is located just outside Ballivor.  But who was Thomas Poynton and why is he remembered?

The plaque marks the location of the cottage where Thomas was born on March 11th1801. He grew up there and worked as a farm labourer and sawyer.  Although the exact circumstances are unclear, it is known that he emigrated to Australia in 1822 and while some Australian records describe him as upright citizen he is listed in others as an ex convict. The latter is possibly accurate, although his name does not appear on the Irish Archive which lists all of those who were transported, as voluntary relocation from Ireland to the Southern Hemisphere was less common in the 19th century than it is today.

It is also recorded that around July 1822, 14 local men were caught up in some local unrest and all were tried, convicted and transported for seven years arriving in Sydney on 21 December 1822.

In 1827 Thomas married Mary Kennedy, Sydney born of Irish parents, and in 1828 they took a ship from Sydney to the Hokianga in Northland, New Zealand, where they bred cattle and milled timber on the Mangamuka River.  Thomas and Mary were both staunch Catholics although they enjoyed good relations with both the Maori and the Presbyterian missionaries who had reached Hokianga before them. Between 1831 and 1837 Thomas expanded his holding and bought almost 5,000 acres of land from local Maori.

In 1830 Thomas and Mary’s first child, Margaret was born and as there were no Catholic priests in New Zealand, Mary took the boat to Sydney, a journey of some thousand miles taking several weeks, to have the baby baptised.  When their second child, Edward, arrived in January 1832 Mary set off on the same journey.  However by the time Catherine was born in 1836 it is more than likely that Mary was growing tired of the extended sea trips and Thomas didn’t relish being left alone to care for two toddlers.  They had obviously decided that enough was enough because Thomas, who was by now a significant timber merchant as well as a farmer, began to petition the church authorities in Sydney to appoint a priest to care for the Catholic families in the area which numbered about twenty by this time.

It would appear that Thomas had considerable influence with the hierarchy because on January 10, 1838, Bishop Pompallier and two assistants, a Marist priest and a Marist brother, sailed up the Hokianga harbour on New Zealand’s west coast to be welcomed by Thomas and Mary.

They were given lodgings in the Poynton’s home at Totara Point and there on January 13, 1838 the bishop celebrated the first Catholic Mass in New Zealand and blessed a wooden statue of the Virgin, carved by Thomas, which became known as “Our Lady of Papakauwau”.

The Catholics rallied round their bishop, the first bishop of any denomination in New Zealand, and took some delight in the fact that they, who had been regarded as pagans by the Protestant missionaries, now had such an impressive leader. According to Poynton, `They came every Sunday to Mass with their families. Those Catholics who lived with native women all got married and had their wives and children baptized; the natives were quite surprised to see so many white men going to Mass.’

In 1846 Governor Fitzroy compensated Thomas for his pre-1840 land purchases from Maori and Thomas and family moved to Auckland where by 1849, he owned 132 acres on the North Shore, with 67 on Lake Pupuke, and is described as the first Pakeha, which is Maori for “of European descent”, farmer in the area.  He raised sheep and grew wheat.

The Poyntons prospered and became pillars of the local community.  Thomas was elected a Warden for the Hundred of Pupuke, a very early and short-lived form of local government, and was a founder and donor to the local library.  However, Thomas and Mary never forgot their Irish roots and remained firm Catholics, while being respected across all denominational lines.

They donated 10 acres to the local Catholic Church and their status in the community is commemorated today by Mary Poynton Crescent and the Poynton Retirement Village, both built on what was part of their property.

Mary died 15 October 1891 aged 79 and Thomas 9 March 1892 aged 90.  They are buried side-by-side at the Bayswater Cemetery where they were the first Catholics to be buried in that Cemetery and their well maintained headstones survive today. 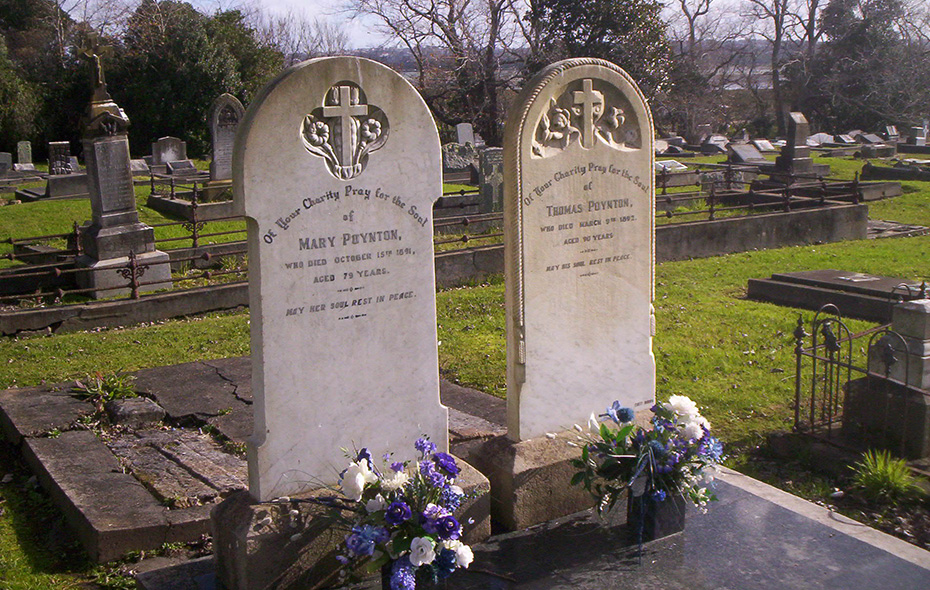 Edward unfortunately died as a child and although Margaret and Catherine married both remained childless and the only Poynton descendents remaining today are those of Thomas’ brother Jervis. 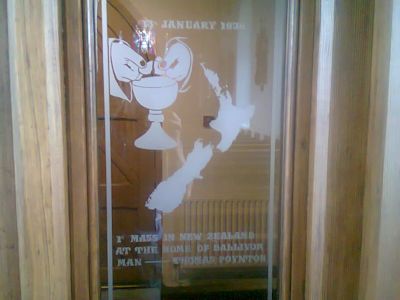 Apart from the plaque we know so well Thomas Poynton is remembered in Ballivor by an engraved window in the church and a housing estate on the Trim road.